Yesterday I posted my views on Dirty Dick DeVos's bailing out of making a run for the Governor's chair in Michigan. My take is that a new run will simply open up old wounds the Amway executives would like to keep scabbed over. More pictures of Dick's Head, one of the most effective campaign strategies ever unleashed against another candidate anywhere, would have been a public relations nightmare. A well known political Blogger picked up on my post and gave it a prominent post on his blog. I invite readers to take a look around Blogging for Michigan and also read the article featuring one of my posts on Amway Global Cult Intervention by clicking here.

While I am on the topic, I discovered another very good Michigan Blog which also expressed views on Dirty Dick DeVos's Saving Michigan saving decision. Click here, and if you like this article, why not go ahead and kick the tires on Skoop's Blog?

Blogging and bloggers do indeed make a difference. Obviously bloggers can fill in the gaps left by the traditional media channels who actually do a very bad job of reporting the news. Nothing highlights this more than the DeVos story which they have fumbled and misreport. They may be overly kind, fearing Billionaire business men in their midst, but we bloggers do not have to kowtow and obviously show the moxey of any good boxer by landing a few punches once in a while. Media outlets in and around Grand Rapids like MLive.com might as well be PR Hacks--and I am not totally convinced that they aren't? The way they spin Amway stories to include the recent political sabre rattling at the Amway Grand might make everyone believe that Dick and Rich DeVos are the Lords of the Rings, not the folks at the helm of a pernicious World Wide Cult.

We need blogs like Local Area Watch to report the rest of the story. I am left scratching my head why I haven't seen any more of the great posts LAW has produced in the past. Makes me wonder why?

Since this is the Soap Box, I want to also highlight a Amway critic's blog as well. Quixtar The Dream Or The Scheme is an excellent Blog. There is just something special about the prospective of an ex-Amway 'distributor' that gives voice that can easily be understood by those still being hoodwinked by the motivational cults which operate under the Amway mother-ship. The recent post on this blog is very well written and the Random observations should be taken to heart by those striving in a scheme.

Another example of a blogger who speaks his mind and pulls no punches, making really pointed observations of his own is Rocket's Rants. Rocket is a good man for one reason, he speaks his mind, and he isn't afraid of even setting me straight if I loose scope. This indeed is a complement of the highest order. Rocket I want to point out to all readers coined the term "dudes" and as friends of the dude's movement continue to chime in from all over the World--with Ozzamwayvictims.com independently operating their "dudes" honor roll type posts. I am so heartened that things are moving on well. Seems to me that Tex of Tool Scam infamy, has a cause that is gathering very little snowman as it doesn't really snowball down hill at all. I have been a reader of Tex's ToolS cam evidence, but not the conclusions Tex ask readers to make--love Amway, hate the Kingpins--are stupid; indeed, Tex debunks himself. Tex's Tool Scam views are in the end very embarrassing to Amway executives. It just makes the Amway Labyrinth a stinky tunnel full of rotting corpses. Actually, as critics go, Tex's Quixtar Blog should convince any prospect that Amway isn't a good thing to get involved with, regardless of all the flimsy arguments Tex makes about the products, the prices and the business. His strategy is rather flawed as Amway Critic extraordinaire Porkchopjim has debunked. Even Rocket has observed that Tex has had his ass handed to him in a recent string of comments on Quixtar Cult Intervention. I mostly agree, but I have a few observations to make with a critical insight about the effects of Tex's presence on the web. Tex is a very strong willed and persistent commenter; he continues to push forward his agenda, regardless how convoluted that is. Tex enjoys the freedom to spin the Tool Scam and Amway anyway he wants. Insiders like Joecool also are well versed in the nature of Amway deceit with an insider's keen eye. I believe that just like in a legal dispute, all the evidence is in. Scott Larsen provides the evidence in detail on his AmQuix pages, making him the top dog of Amway Criticism. By comparison, If Tex's mono-blog was a car, it would be a pounded up kia sitting on cemment blocks in a pasture field in Texas.

My friend Perceptive Infiltrator has returned from his wearied journeys into a foreign land of broken dreams, but the sun will always shine sooner or later, and this time of year, you have to smile and enjoy it while it lasts. Remember, in the next election, the Republicans can run of the platform of 'change'. The Infitrator is always going to be featured prominently as a link on my blogs because I admire his blog; and although he hasn't updated it for two years, I see his blog does well for Google Search rankings, and he hasn't had to tap a pinky on the keyboard to do it. IBOFB says the Internet is 'static', isn't it great! Admirable my friend, but it is your message which is of most important. I thank you my friend for saying that I am prolific but that honor is misplaced. That honor must go to another friend, David Brear. I know Tex doesn't even take the time to even read much of anything requiring any attentions span; but then again he is busy rubbing old Rich's flabby tummy. (Listen... I want to tell you all a secret, because, shssss, tex isn't listening.) He is in one of David Brear's 'closed logic' black holes. Sadly most of the duped flock of Amway distributors are in the same bad cult addled situation that I describe in detail on Quixtar Cult Intervention.

I can see the ambots being the people in the George Orwell classic '1984' famous picture with Big Brother. 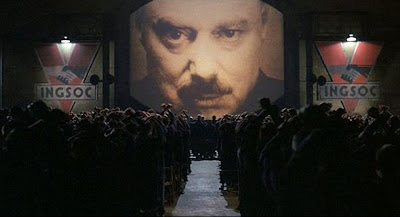 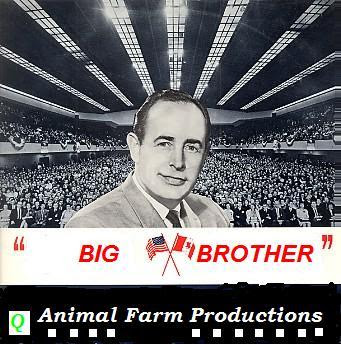 What do you think, slap a mustache on old Rich? Amway's Big Brother!

I thought that both of the 1984 'Big Brother' and the Amway 'Big Brother' would make a great desktop or screen saver art. All the Ambots would get to see Big Brother when they open their laptops when they get to their JOBs.

I've gotten a lot of readers out of Michigan recently after another blogger, actually a high level Michigan office holder featured some of my writing on Amway Global Intervention on his Blogging For Michigan Blog.

Who said bloggers don't have a way to change the world by simply speaking theirs!...qiac 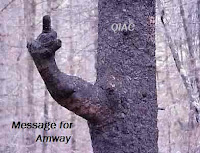 Now, it being that I don't have to bite my critic's tongue, I want to say something. The voice of the public has spoken, and the voice of the voters in Michigan do not fall on the side of Amway corruption. These pyramid schemers amass filthy lucre on the carcasses of their financial holocaust victims which they have steam rolled over for nearly 50 years. How in the world can the traditional press not take notice and speak the truth about Amway's sordid affairs? They more or less keep a lid on the Amway can of stinky worms? Surely there must be a few Bob Woodward types willing to investigate and describe the kind of corruption Amway has dirtied their collective hands in. They allow kingpin cults to fleece the flock of believing dupes called 'Independent Business Owners' (who are anything but independent) while Amway corporate maintain a monopoly product pyramid scheme over the same sorry lot of 'distributors'.

Dick DeVos, The Amway 'Count', must now sleep in his sarcophagus and avoid the light of day! The darkness must always be repudiated by lighting at least one candle and I believe the Democrats have stoked up a good old fashion bonfire providing a beacon of hope for all the people; something the Republicans party seems to have lost sight of. I believe Michigan Governor Jennifer Granholm is a better state Governor than the likes of one Sarah Palin. There is a major difference being governor of Michigan and being Governor over the vast wastelands of Alaska. Palin has been revealed to be an empty dress suit; while the other now is basking in the light of the Democratic sweep to power. Finally, the Democrats have seen the repudiation of the failed policies of the current Administration and outgoing Bush Administration. A strong indication that Michigan should firmly stay in the column of blue states.

I would love to see A proposed regulation be invoked mandating a waiting, cooling off period whereby all MLM recruits are mandated the time necessary to do proper background research on any MLM proposal. Any such mandate could also provide people encountering buyer's remorse to receive a 100% refund for enrollment fees.

Mr. Obama has smote the Republicans, smoked his cigarette, had his celebratory beverage and is now going to Washington! Dirty Dick DeVos has had to retire to his sarcophagus in the tomb room of the pyramid in protection of the Amway Treasure Room. 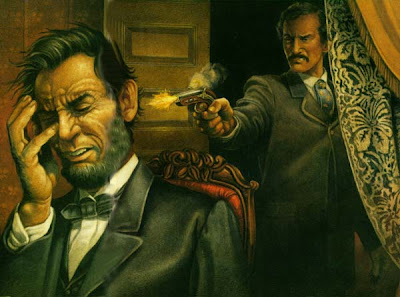 If Old Abe, had in a dream, been able to see what has happened to his party during the Bush years, he most likely would have pulled the trigger himself, he wouldn't have required the services of actor Wilkes

'REMEMBER, AFTER YOU GET DOWN OFF THE SOAP BOX, YOU THEN CAN USE THE SOAP TO WASH OUT THE MOUTHS OF THE AMWAY APOLOGITS.'
...SA8 Indeed 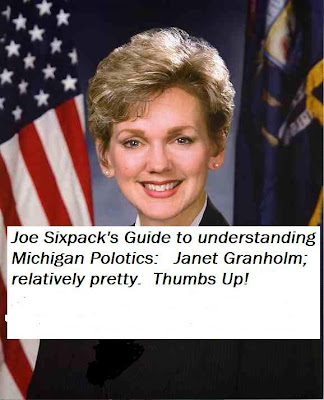 Take One Look At The Real News: 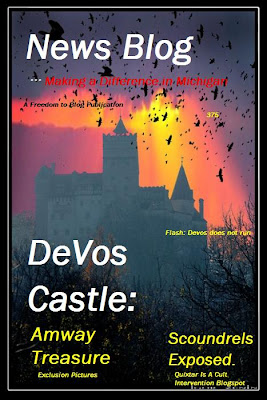 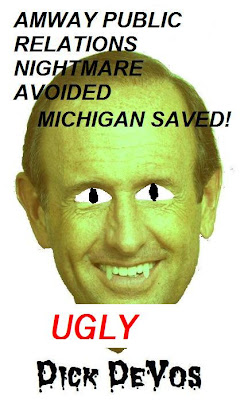 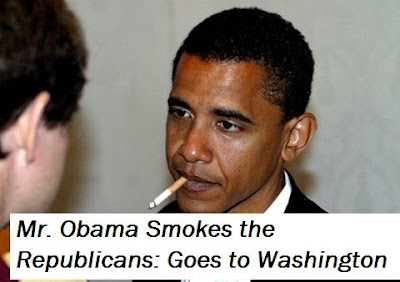 Posted by quixtarisacult at 8:03 AM