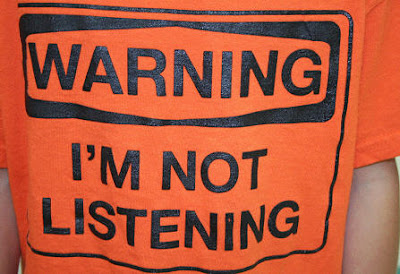 Once again, Robin Luymes, PR Manager at Amway Global and Super Du Blogger has decided to exclude another of my comments from his pro-Amway blog; So once again I exercise my right to publish the comment here on my own blog.

(New readers can catch up on the controversy by reading the comments below these two blog posts by clicking here and here.)

Below is my submitted comment, and following that is the email Mr. Luymes sent to me in response. Dear readers, I'll let you be the judge of the whys of this censorship situation? Obviously 'de 'nile' is not just a river flowing past their pyramid scheming headquarters in Ada Michigan! I don't contend that comment moderation is censorship of free speech, but I do contend that the message was excluded because Amway denies that a financial holocaust has taken place which contradicts all their Public Relations efforts to foster the myth that Amway is a great opportunity.

"I keep hearing the "proven track record" spoken about Amway. This is a one of the Amway Myths, like "the check is in the mail." The proven track record of Amway is the FINANCIAL HOLOCAUST! All the Amway Apologists in the World aren't going to debunk this one certain FACT! There is no good track record here. Usain Bolt has a track record. Check Amway's track record and you realize that their event is so much more grueling than any marathon, where many start the race, most drop out from exhaustion, and very few ever reach the finish line. The financial holocaust for distributors is known. It is a fact. This is where the Amway discussion should begin. 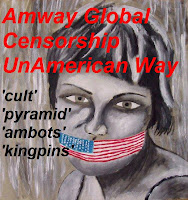 Censoring words like 'kingpins', 'cult', 'Ambots' 'pyramid' is indeed a means to squash dissent. These terms are intended to point out exactly what is wrong with Amway. To censor the truth is to promote the myth! Robin, I am happy that you finally decided to post my last comment. I was beginning to think that you were going to exclude it as well, leaving me no voice to respond to those who personally attack me, make me the issue, and seek to avoid addressing the topic you began with your post. Rocket makes good points. Tex beats on his Tool Scam drum, IBOFB obfuscates with the truth and denies the Amway Financial Holocaust, Bridgett makes it her mission to make personal attacks and she has acted like a Internet Troll herself--See the fanhome link on my web page), Visioneer lives in a dream world,and rdknyvr is a typical Amway Apologist. These are simply observations not to be taken as a personal attack. I am simply responding.

Cult is as cult does. Amway, Scientology, and the Moonies: The Triumvirate of World Cults, period. What is there to misunderstand? Why keep going down the road to deception? Robin, you bring up matters in general that occur else where on the Internet. That is a very wide row to hoe. Indeed any conclusions can be drawn based on such an incredibly broad scenario. You obfuscate instead of concentrate on the real Amway issue of “What has Amway Wrought?” and the “Financial Holocaust” which historically is a FACT."

LUYMES EMAIL BACK TO ME: 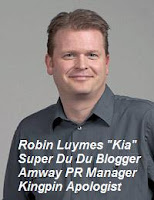 "I am not posting your last comment. It is filled with sensational statements that are not proven with any facts. Just stating something is a fact doesn't work. Provide proof points. And provide them in a matter-of-fact way. I don't care if you rip on me or others at your site, but here at my blog you will have to change your tone. I give an inch and you seem to expect that I'll give a mile. Sorry, not going to happen."...Robin Luymes

I have reported that Robin Luymes has in the past tried to 'take me to school' about the use of the words he desires to censor out of existence on his blog: CULT, KINGPINS, AMBOTS, and PYRAMID. For more information related to today's post, follow these three links beginning with the first:

Courts Describe Amway Top Tool Distributors as Kingpins—So Why Oh Why Can't I?

Amway Kingpin Apologists and the Terminology of Deceit 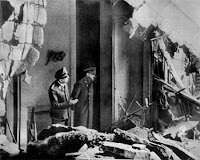 Robin Luymes is a Amway Apologist and denies that the Amway Financial Holocaust has taken place. Amway has had a nearly 100% Rolling Failure rate for its cult believers over the near half century of operations. Amway is part of the Triumvirate of World Cults taking its place along side of The Unification Church (the Moonies) and The Church of Scientology.

"Luymes and others of his ilk deny the Amway financial holocaust the same way David Irving denies the Nazi holocaust took place. Mr. Luymes, denying the Amway financial ruins makes you bunker mate to Mr Irving where you must breath Hitler's stale air! Perpetuating a lie as if it were the truth makes one guilty of fraud!"...QIAC

Posted by quixtarisacult at 10:51 AM

It is my guess that millions of IBOs have lost billions of dollars over the years to the benefit of a bunch of greedy tool prmoters.

I think it is significant that just yesterday, a Amway apologist working for Amway in their Ada, Michigan Alticor offices described their products and tools as "crap". How wonderful that will be for Doug DeVos to read on Monday morning? Might someone be fired?

How appropriate that a lowly commenter on one of my blogs, Marge, a victim of the Amway financial holocaust, has caused some Amway employee to go off the deep end of sanity and try to provide a face saving deceptive comment that has backfired in such a compromising way?