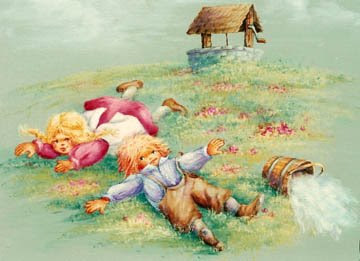 Amway apologists IBOFightBack and Bridgett Baron have had a public 'falling out' with a former Amway kingpin, Doug Wead, who has publicly announced that he has formed a 'consulting' relationship with an Amway competitor, Xango--another MLM competitor of Amway who market a pomegranate health drink, a near clone-like product similar to another of Amway's bitter MLM rivals, MonaVie, who markets an accai berry drink in a wine bottle. Readers might recall that many of Amway's ex-kingpins, like Orrin Woodward, left Amway in August of 2007 during the IBO Rebelion and are now selling their mixed bag of 'motivation' with MonaVie and the likes of Xango as well.

Seems Doug Wead, a former presidential advisor on the religious right wing and former Amway 'diamond' kingpin, has 'pulled the covers off' of this IBOFightback chap (David Steadson) and Bridgett Baron stating that "industry insiders" describe them as "Jack and Jill". Here is what Mr. Wead has said on his own blog about Steadson and Baron:

"BTW, for those of you listening in, Bridgett and IBO fightback are called “Jack and Jill” in the networking industry. It is presumed that they are freelance apologists for Amway assigned to live on the net and promote their employers." ...Doug Wead

Much speculation concerning IBOFightBack has been garnered on the web about what would seem to be obvious connections between him and Amway (headquartered in Ada, Michigan). It has precipitated much discussion on the (webraw) Quixtar Blog and within the Q-Blog Forum. Steadson has claimed that he acts independently of Amway, but incorporates a plethora of materials and videos on his 'The Truth About Amway' web pages obviously supplied to him by Amway which supports Steadson's supposedly 'unofficial' propaganda--all of which offers Amway up as a great opportunity.

Steadson does for Amway what it could not openly do for themselves because of the questionable tactics which Steadson is free to employ and for which Amway would want to officially distance themselves from. Amway of course offers up their own 'official' pages and fluffy 'Opportunity Zone' blogs which generally do not address all of the 'scam' and 'consumer fraud' allegations against Amway made by people from all walks of life and for which Steadson is always 'fighting back' against. Steadson feels free to openly take on all the Amway critics like Scott Larsen as well as anti-Amway blogger Joecool.

Bridgett, a propagandist, much like Steadson, offers up a rosy picture of the Amway business as well. Her views have been described as 'pink'. Both Steadson and Baron prowl the Internet 'dispelling the Amway myths'. They feel their 'job' is to follow the search engine results for pages critical of Amway and 'troll' blogs and pages they deem paint an 'unfair' picture of their beloved Amway. Author and Amway critic, David Brear, asks the question, "When does this fellow (Steadson) ever sleep?"

IBOfightback and Bridgett describe Amway as a multi-billion dollar business which operates world wide, as if these sales figures somehow make the Amway distributors somehow magically successful themselves. The sad truth is that the rolling failure rates for Amway distributors approaches 100%. Amway's cult adherents labor in the 'Biblical' Amway vineyard, many times for years without ever producing a quantifiable profit after expenses. Amway rank and file 'distributors' (heavy irony intended) spend countless time and money attending paid candle lit rallies and buying the motivational materials sold by 'kingpin monopolists'. Knowing the sad state of affairs, and of the Amway 'distributors' failure rates, Jack and Jill still promote Amway as the greatest of opportunities. This denial of the 'Amway Financial Holocaust' then makes these 'reality inverting' apologists, promoters of premeditated fraud: 'intent to defraud others' into joining the cultic Amway 'bidnez'.

These dunder heads, who now must deal with Amway critics calling them "Jack and Jill" have made a incredible error in questioning possibly the most prolific of all Amway propagandists, Doug Wead.

Wead, no longer needing to carry water for Amway has laid the cards out on the table, revealed the true purpose and nature of this delusional pair of 'fairy tale' misfits, now made all the more comical by someone whom they at one time professed admiration.


Doug Wead has recently admitted that he wrote many of the books attributed to King of the Kingpins, Dexter Yager, making him the real propagandist behind Dex's throne.

Jack Fell Down and Broke His Crown

And Jill Came Tumbling After

How appropriate that theses 'Jack and Jill' scoundrels have been 'outed' for their "assigned" treachery by one of their own kindred. I am not a fan of Doug Wead, but his recent revelation about Jack and Jill is very interesting indeed. I have referred to Steadson as the Swedish Swindler (as he now operates out of Sweden) although he is originally an Australian national.
Posted by quixtarisacult at 7:06 AM

Lately, IBOfightback has been blatantly lying. I believe it was he who wrote an excerpt about me on Amway wiki and there are blatant lies such as me being caught creating fake personas to creat fake blogs. But I guess it's not surprising that IBOfightback would stoop to such measures to try and discredit an Amway critic. I guess he cannot debate the merits of the truth so he needs to tell lies and half truths.

The ironic thing is that I suspect his Amway business parameters are no better than out friend tex.

I would have to agree that compared to IBOfightback, our friend Tex is much the better man.

I recently caught IBOFB trying to post on my blog and trying to cover his tracks using "HideMyAss.com".

It's funny when the pundit of deceit is probably the one who wrote the Amway wiki article accusing me of creating fake ID's without having any evidence.

...devious tactics for a desperate swindler.

bridgett is one ugly wench

Ugly in what way? Like a pit bull? Or ugly in her deceitful intent to defraud others into a closed market swindle?

What do you guys keep criticize on Amway??!! Amway has been in the world for 50 years!!! If Amway is a scam, Amway will not sustain for 50 years!!! Moreover, Amway products such as Artistry - Top 5 in the world especially in Japan and Korea; Nutrilite - the no. 1 leading world supplements (already 70+ years in world). If they are a scam, who are you??!!

I posted your comment because it points out the utter blarney Amway adherents are supposed to believe, that the Amway products are #1 and the like. What blarney!

All the talk about the makeup and vitamins being number #1 is a load of hog manure designed to keep the flock of Amway believers deluded. These claims are made more for Amway Cult Adherents, as the general public doesn't buy into these kinds of exaggerations (which must be so heavily "qualified" to even to be made).

For your information, I believe that Avon, a very respectable company compared to Amway, sells more makeup worldwide than Amway (Artistry), and in total sales is larger than Amway. In MLM Amway is #2 behind just this one competitor alone. Amway is 'small beans' compared to traditional marketing giants like Proctor & Gamble to name just one. Amway believers are asked to believe some of the oddest marketing bull crap ever told.

Amway repeats their hollow claims over and over until their cult followers believe and the paw parrot their reality inverting myths.

I posted your 'anonymous' comment to make others aware of the kinds of lies and myths that Amway and their apologists (like you) spread. Do you really think that Amway really outsells Avon? Do you believe that the Nutrilite vitamins really out sell traditionally marketed vitamins sold on the free market at brick and mortar retailers like Wal Mart? Have you been offered any bridges in Brooklyn lately my friend?

You believe the Amway myths, and most likely are an amway apologist (on the order of IBOfightback or Bridgett Baron) who must go around setting all the regular folk (who know Amway is a scam business) straight. Maybe it is you who needs to back away from the Amway Koolaid for a while before they drop the cyanide in it and you join the other 99% of folks who lose money in the Scamway 'bidnez'--most of which quit after being fleeced like suckers for a season.

...oh I was wondering, does hidemyass.com really work?

Isn';t it funny how IBOFB creates fake personnas and bloags and tries to use hidemyass.com to cover his tracks.

He is a merchant of deception, a snakeoil salesman, and an underhanded pundit of deceit.

In reading your comment, I realized that I had originally coined the term "pundit of deceit." You forgot the "I Bend Over For Buddies" moniker that I also pegged him with. What a scoundrel!

Is it any wonder that Amway and Scientology are near mirror images and create two spreading world cults. Of course, some believe world cults to be just great! The apologists, those bunker dwellers who make denial a hole in which they build their fort. The air is stale, cool and damp.

QIAC, yes you get full credit for the monikers you have given IBOFB. And Doug Wead gets credit for "jack and jill". LOL

Clipping coupons saves more money than wasting the extra $ on Amway goods in the insane belief one might get wealthy in Amscam's merry-go round of greed.

Excellent Post...I must thank you for this informative news....
This is my first time go to see at here and i am really pleassant to read
all at one place
Packers and Movers Mumbai


Packers and Movers Bangalore as a Services providing company can make all the difference to your ###Home Relocation experience. Bangalore based Company which offers versatile solutions, Right team that easily reduce the stress associated with a ✔✔✔Household Shifting, ***Vehicle Transportation. we help things run smoothly and reduce breakages and offer you seamless, Affordable, Reliable Shifting Services, Compare Shifting Charges @ Packers And Movers Bangalore